‘Salt Bae’ casts vote in own style on referendum day

The co-partner of Turkey’s global Nusr-et chain of grill houses, Nusret Gökçe, who recently became a social media phenomenon for his meat-cutting and salt-drizzling skills, voted early on April 16 in Istanbul.

Gökçe shared a photo of him casting his vote into the ballot box with his salt-drizzling move.

A number of fans left comments under the photo.

Gökçe, who has at least 6 million followers on his social media accounts, had photos taken with fans before he voted. 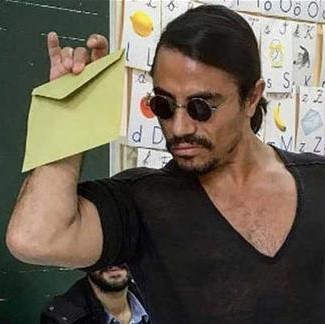 He previously said Nusr-et would be opening branches in New York and London in the next few months, adding that success was possible by “telling stories and drawing people’s attention”.