Lion Shows Tourists Why Windows Should be Closed 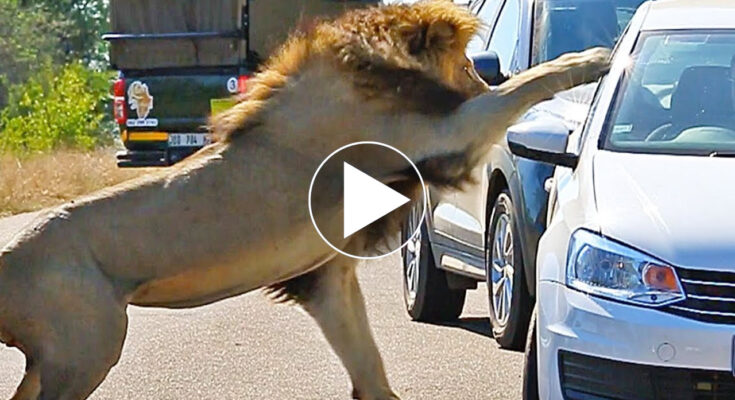 People were slowly moving off and more arriving, as is usual with a lion sighting, Eventually, I got close to the front. By this time, the big lion had made a few advances on the female, nuzzling her and trying to get her consent, but every time, he was rebuffed with a fierce growl from her.

After the umpteenth attempt, all of a sudden, he walked away from her and started staring at the occupants of the closest car. I guess that he either decided to see if he could impress his lady with some bravado, or else he needed something to take his frustrations out of. At this point, I quickly started filming, as it looked as if something was about to happen.

Luckily I started the camera rolling, as, quick as a flash, he had attacked the car and turned back to the female, as if to say, “Look how brave I am.” There was nothing that the occupants of the vehicle had done wrong, and luckily they had their windows up, as it could have otherwise ended in disaster.

They just happened to be the closest vehicle to the lion when he lost his mind. The shaken tourists in the vehicle drove off shaken but unharmed. When looking at the reaction of the driver in the video, it did not even seem as if he was that afraid. But on speaking to them afterward, I think that they were fairly traumatized.