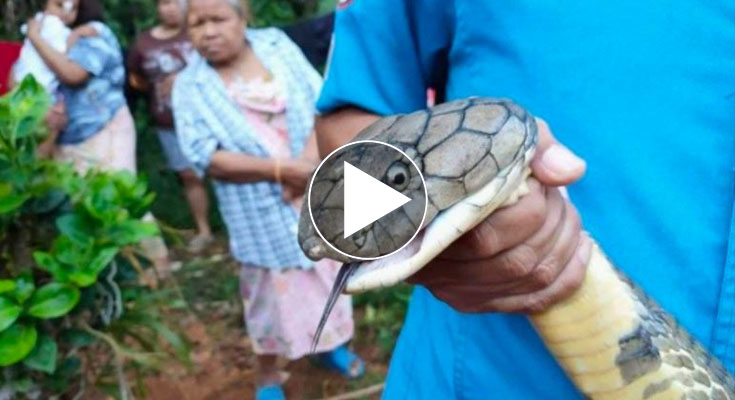 During the summer, when the lake water is dry and dry, all the small and big animals in the forest lack water to drink. Among them, a large snake because there was no drinking water in the forest came down from the mountain into the village to find drinking water at home. A villager named Chong Ang panicked when he was struck by the giant snake that it had.

Length up to 5 meters. The snake crawled into the backyard and crawled through the back wall of the water on the head of the 5-year-old housewife’s daughter. The snake slipped into the bathroom. Then called the rescue squad to help catch. It is believed that this snake actually came down from the forest on the mountain to find water to drink because it is very big and long. At 9:00 a.m. on February 16, the rescue team.

Cape BPT Thak Parach Foundation Brings Snake Traps It is a viper, more than 5 meters long and weighs more than 10 kg while hiding behind the washing machine in the bathroom at 217, Village 1, Khao Thong Rong Commune, Moeung District, Krabi Province. It. The officer then dragged him out of the house in the middle of the street in the village, the crowd came to watch excitedly and reviewed several times. At that time, some people believed that

“He said” It is a snake that descends from the mountain, recognizable by its large size. Mrs. Bo Bun Tith Chat, 44 years old, is the owner of the house. Before the accident, while waiting for his 5-year-old daughter to get dressed for school. After hearing a loud noise at the back of the house, he hurried to look and found a snake crawling on the bathroom wall at the back of the house. So he hurried to find his daughter. But found the king of snakes, raised his head open on the bathroom wall above his daughter’s head.

At that time, I was very scared because I was worried about my child. He grabbed his daughter by the arm and immediately ran out of the house. Before the snake crawls into the bathroom and asks the neighbors to notify the rescuer to help catch the snake.

Initially, experts concluded that the snake traveled about 500 meters from the house to find drinking water and slipped into the bathroom. Due to the drought, natural water resources are scarce. While some villagers said: It should not be afraid of it, but it came here to find drinking water and not to bother people. What if this snake is innocent and does not hurt people, what do you do about it?.