15 Moments When Snakes Messed with The Wrong Opponents 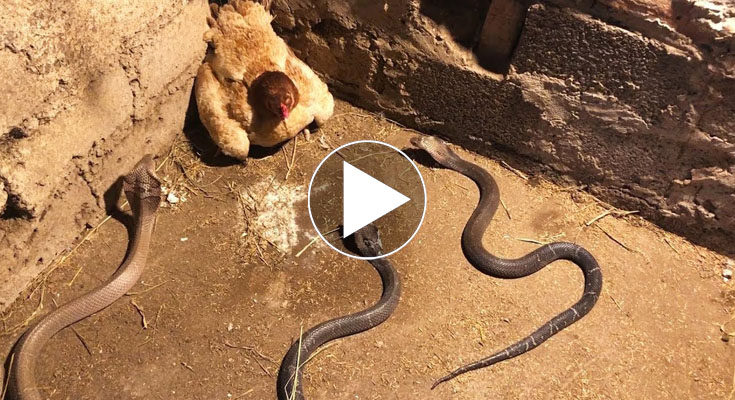 Snakes are deadly predators, and when they target prey, they’re usually successful. But they also have enemies that give them a run for their money.

Have you ever seen a Praying Mantishandle snake? What about a secretary bird? If you want to see some wild animals that know how to handle snakes. Keep watching, as we count down 15 moments when snakes messed with the wrong opponents.

In the wild, black mambas have few predators. Her adversary, the slender mongoose, a well-known snake hunter, is preparing to confront her. They may appear to be featherweights in the ring, but they are two of the most lethal predators on the planet. The mongoose is a fast mammal with razor-sharp fangs. A mamba bite, on the other hand, has the potential to kill fifteen people. Consider how a five-pound mongoose would react to such a situation.

Although deadly, the mamba is not particularly aggressive. Her venom enables her to subdue and immobilize her prey. Toxins in snake venom bind to chemical receptors in victims’ bodies, interfering with nerve and muscle communication. Because the receptors on mongooses have changed, venom simply bounces off their muscle cells. The mongoose’s method of exhaustion is to dance circles around its prey. The final shot is lethal. The spine is separated from the back of the head with a single snap.

The snake isn’t dead, but it’s immobile. The gain outweighs the risk for the mongoose. A seven-foot snake is a hardy meal for a small predator. In the Kruger National Park, a dwarf mongoose fights a deadly opponent, a black mamba. Mamba snakes, which can reach lengths of up to four and a half meters, are the most feared in Africa. Humans can die because of their bite, which is referred to as the “kiss of death.”

The mongoose was thought to be trying to keep the snake away from its burrow. Mongooses are known to eat rats, birds, and snakes, but this massive black mamba was not your average meal. This pet mongoose discovers and challenges a cape cobra in his home.

Because the mongoose is a snake killer, the cobra should flee as soon as possible. The only issue is it must first get past the mongoose. As soon as it gets outside, the cobra flees and heads for the open field, but the mongoose pursues it and tries to outwit it.

Look at this mongoose battling a large cobra. This snake is particularly frightening because it repeatedly attempts to bite the mongoose. The mongoose bolted, and I’m not sure if the snake hit it with the final strike in front of a crowd of witnesses, a mongoose attacks a cobra in the middle of a road.

The cobra is unsure how to flee, but the mongoose appears to have won yet another battle. This mongoose ambushes a black cobra and devours it by chewing its head off in seconds. The snake didn’t have much of a chance to defend itself because it hadn’t anticipated the onslaught.

This bunny isn’t messing around when it pounces on this snake and teaches it a lesson or two. The snake tries to flee, but the rabbit pursues him. To spice things up, the rabbit did a few big kick-combos and a backward flip. This rabbit puts on a show to remember when this snake makes him do all kinds of hops and summersaults. The rabbit isn’t afraid of the snake and chases it until the reptile can’t take it any longer and slithers up a tree to escape the crazed bunny.